What is Solidarity?: Abolition 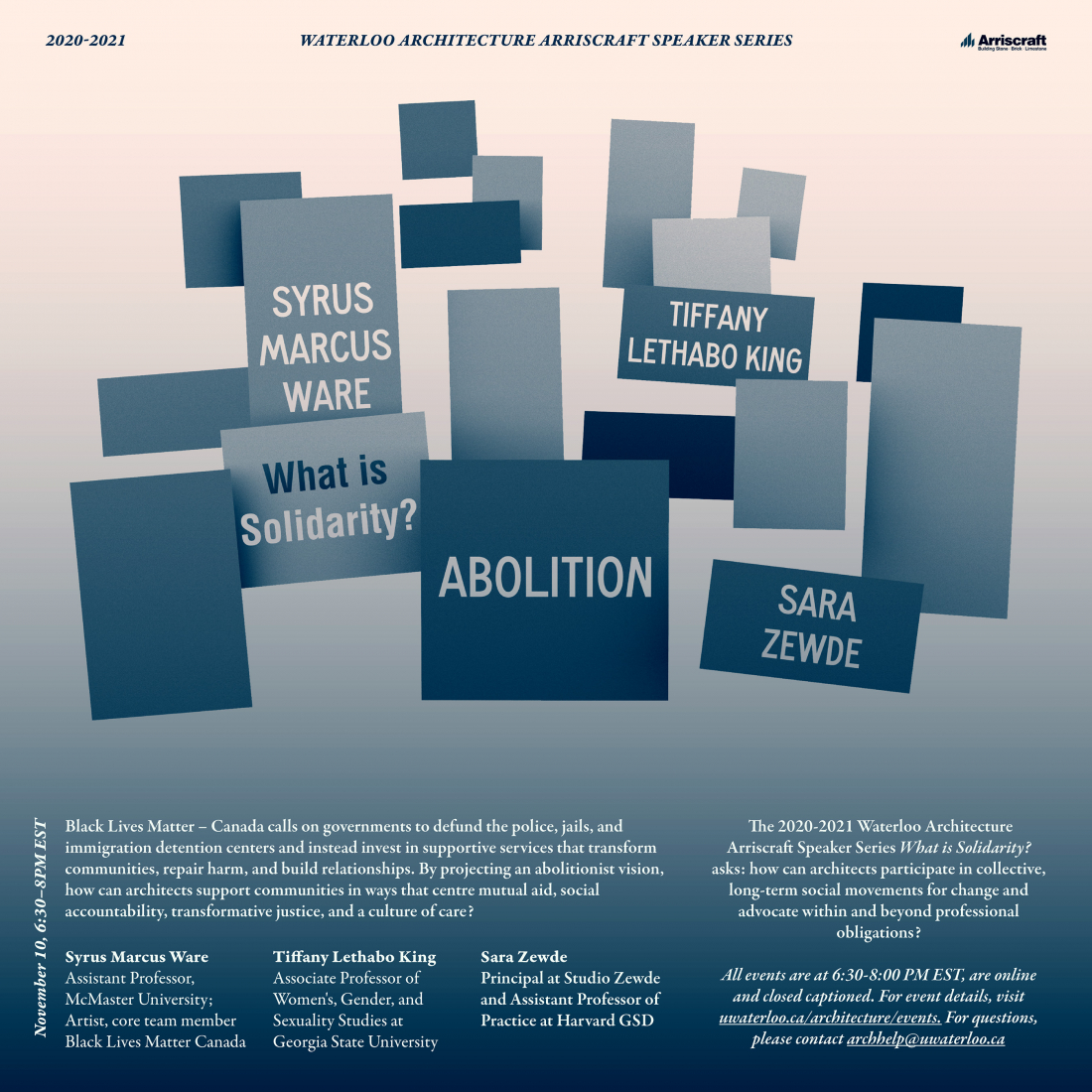 Movements, research, and design for another world

Moderated by Ella den Elzen (she/her), Designer and Curatorial Coordinator based in Montreal; with

Black Lives Matter – Canada calls on governments to defund the police, jails, and immigration detention centers and instead invest in supportive services that transform communities, repair harm, and build relationships. Police abolition broadens the prison abolition movement founded in the 1970s, which linked resistance to the anti-Black violence of mass incarceration, to the 19th Century movement to abolish slavery. Architects are authors of zoning policies, urban renewal, gentrification, and prisons, which act as spatial structures of white supremacy. By projecting an abolitionist vision, how can architectural design create better communities that centre mutual aid, social accountability, transformative justice, and a culture of care? By aligning with the abolitionist movement, architects can begin to understand the racist and colonial history of our profession, and work towards building a future where all peoples are free.

Syrus Marcus Ware (he/him) is an Assistant Professor at the School of the Arts, McMaster University. He is a Vanier scholar, visual artist, activist, curator and educator. Syrus uses painting, installation and performance to explore social justice frameworks and black activist culture, and he’s shown widely in galleries and festivals across Canada. He is a core-team member of Black Lives Matter – Toronto, a part of the Performance Disability Art Collective, and an ABD PhD candidate at York University in the Faculty of Environmental Studies. His on-going curatorial work includes That’s So Gay (Gladstone Hotel, 2016-2019) and BlacknessYes!/Blockorama.  He is the co-editor or the best-selling Until We Are Free: Reflections on Black Lives Matter in Canada (URP, 2020)

Tiffany Lethabo King (she/her and they/their) is an Associate Professor of Women's, Gender, and Sexuality Studies at Georgia State University. Her research is situated at intersections of slavery and indigenous genocide in the Americas. King’s book The Black Shoals: Offshore Formations of Black and Native Studies (Duke University Press, 2019) argues that scholarly traditions within Black Studies that examine Indigenous genocide alongside slavery in the Americas have forged ethical and generative engagements with Native Studies—and Native thought—that continue to reinvent the political imaginaries of abolition and decolonization. King is also co-editor of an anthology titled Otherwise Worlds: Against Settler Colonialism and Anti-Black Racism (Duke University Press 2020).

Sara Zewde (she/her) is founding principal of Studio Zewde, a design firm in New York City practicing landscape architecture, urbanism, and public art. The studio is devoted to exploring the "aesthetics of being" and creating enduring places where people belong. In parallel with practice, Sara serves as Assistant Professor of Practice at Harvard University Graduate School of Design. Sara was named the 2014 National Olmsted Scholar by the Landscape Architecture Foundation, a 2016 Artist-in-Residence at the Robert Rauschenberg Foundation, and in 2018, was named to the National Trust for Historic Preservation's inaugural "40 Under 40" list. Most recently, she was named a 2020 United States Artists Fellow. Her work has been exhibited at the 2016 and 2018 Venice Biennale, in the Brazilian and U.S national pavilions. Sara holds a master’s of landscape architecture from the Harvard University Graduate School of Design, a master’s of city planning from MIT, and a BA in sociology and statistics from Boston University.