What is Solidarity?: Land Back

Register for Land Back (required to attend event) 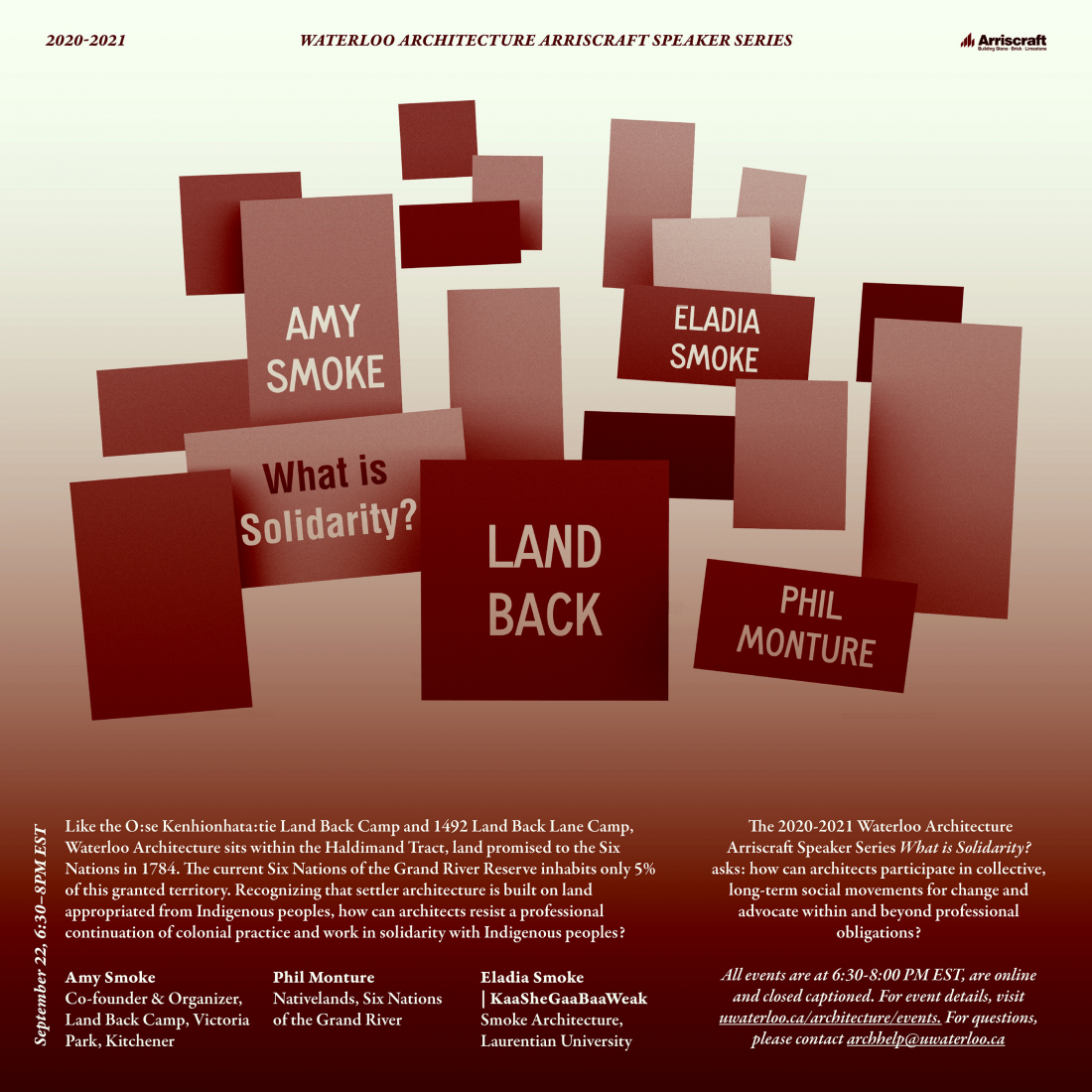 In the summer of 2020, the O:se Kenhionhata:tie Land Back Camp set up in Kitchener’s Victoria Park, demanding fees be waived for Indigenous community events in the city, access to land in Victoria Park and Waterloo Park for traditional ceremonies, paid Indigenous staff, and a paid Indigenous advisory board for full participation in the governance of Municipal public spaces. At the same time, 1492 Land Back Lane Camp has blocked the construction of a new suburb in Caledonia adjacent to the Six Nations Reserve. Like these two camps, Waterloo Architecture sits within the Haldimand Tract, land promised to the Six Nations in 1784. The current Six Nations of the Grand River Reserve inhabits only 5% of this granted territory. Recognizing that settler architecture is built on land appropriated from Indigenous peoples, how can architects resist a professional continuation of colonial practice and work in solidarity with Indigenous peoples?

Amy Smoke is Mohawk Nation, Turtle Clan from the Six Nations of the Grand River. Amy is a 2 Spirit mother, public speaker, community organizer, and singer. They have graduated from Conestoga College General Arts & Science, University of Waterloo with a BA and BSW, as well as Wilfrid Laurier University with a Masters in Indigenous Social Work. Amy is one of the founding members of the Blue Sky Singers and is an active community member here in Kitchener-Waterloo. Amy spends much of their time on social justice community organizing and public speaking in order to make visible Indigenous women, girls, and Two Spirit. Having sat on various Indigenous Advisory Boards in the local community Amy hopes to bring more First Nations, Metis, and Inuit education to organizations on the Haldimand Tract today.

KaaSheGaaBaaWeak | Eladia Smoke is Anishinaabekwe from Obishikokaang | Lac Seul First Nation, with family roots in Alderville First Nation, Winnipeg, and Toronto. Eladia has worked in architecture since 2002, and founded Smoke Architecture as principal architect in 2014. She is a Master Lecturer at Laurentian’s McEwen School of Architecture. Eladia has served on the RAIC’s Indigenous Task Force since its inception, 2015. Eladia was on the Unceded international team of Indigenous designers and architects representing Canada at the 2018 Venice Biennale. Current professional work includes post-secondary, community, and multi-family residential projects, working with First Nation and institutional clients.