What is Solidarity?: Food Sovereignty 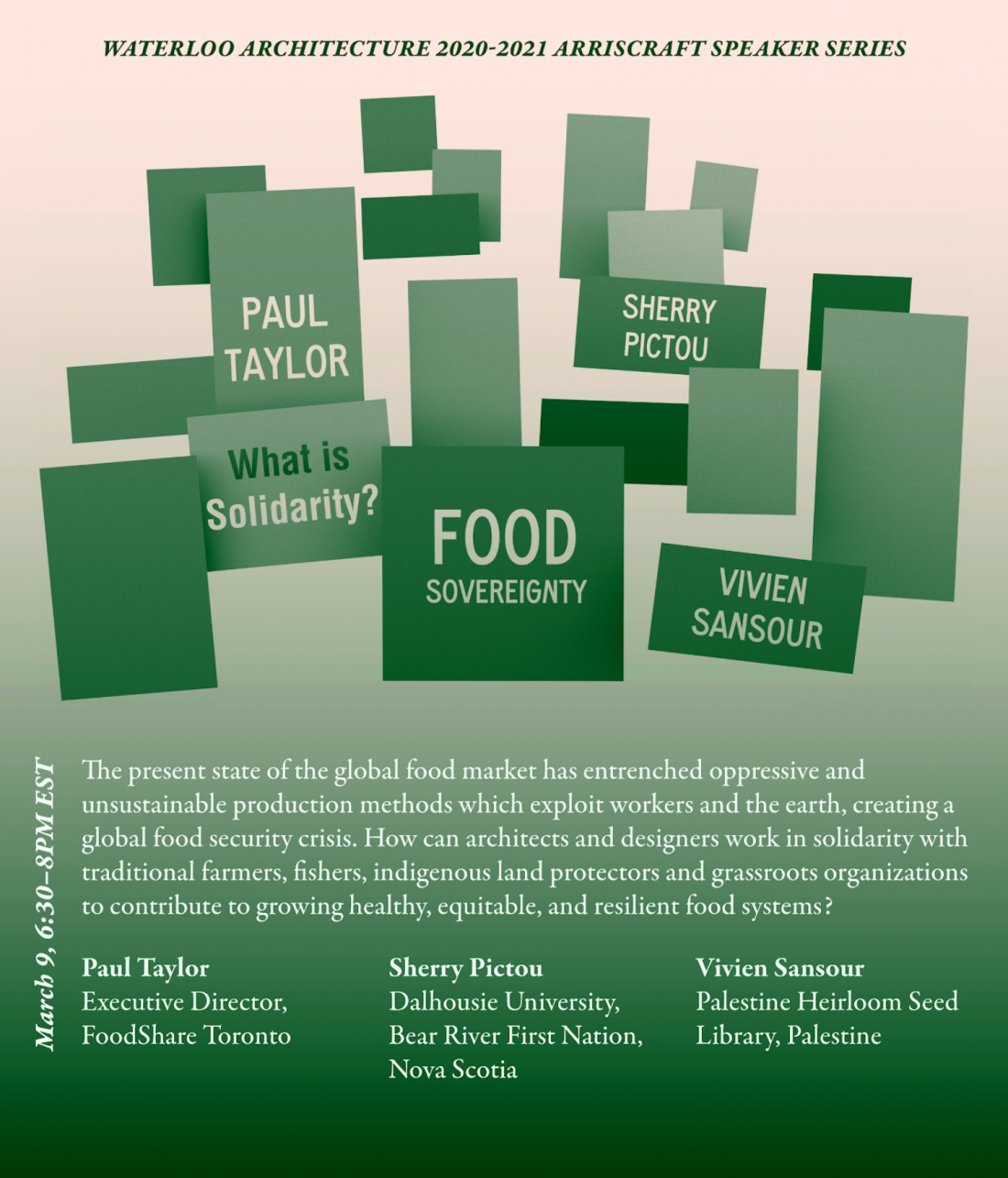 The world has been shaped and reshaped by food throughout history. From Indigenous agroforestry design to feudal field systems how and what people eat has always had spatial influence far beyond the extents of our tables. Spanning from our kitchens to industrial farming geographies, can designers work with existing food sovereignty movements to reimagine the space of food? Food sovereignty, first defined in 1976 by Via Campesina the International Peasants Movement, centres the rights of all peoples to healthy, culturally appropriate, ecologically sound, and self-determined food systems. The present state of the global food market has entrenched oppressive and unsustainable production methods which exploit both workers and the earth, creating a global food security crisis-one which is disproportionately borne by Black and Indigenous communities. Racism, pollution, and the ongoing dispossession of land from Indigenous peoples have damaged traditional harvesting practices and created barriers for access to healthy food.  The food sovereignty movement, driven by farmers, fishers, Indigenous land protectors, and grassroots organizations, has from the start looked to disrupt these barriers and reimagine these systems in ways which encourage the revival of cultural and ecological relationships to land. As architects, landscape architects, and urban planners, how can we follow this work and contribute to growing healthy and resilient food systems that are equitable for producers, distributors, and consumers?

Paul Taylor (he/him)
Paul Taylor is Executive Director of FoodShare Toronto and a lifelong anti-poverty activist having worked both in Toronto and in Vancouver. Growing up materially poor, Paul has focused his career not just on helping others, but dismantling the beliefs and systems that lead to poverty and food insecurity, including colonialism, capitalism, white supremacy, and patriarchy. In 2020, Taylor was named one of Canada’s Top 40 under 40 and Toronto Life's 50 Most Influential Torontonians of the year.

Sherry Pictou (she/her)
Dr. Sherry Pictou is a Mi’kmaw woman from L’sɨtkuk (water cuts through high rocks) known as Bear River First Nation, Nova Scotia. She is an Assistant Professor in the Faculties of Law and Management at Dalhousie University focusing on Indigenous Governance. Dr. Pictou is also a former Chief for her community and the former Co-Chair of the World Forum of Fisher Peoples. She is a member of the The Intergovernmental Science-Policy Platform on Biodiversity and Ecosystem Services (IPBES)Task Force on Indigenous and Local Knowledge. Her research interests include decolonizing treaty relations, Social Justice for Indigenous Women, Indigenous Women’s role in food and lifeways, and Indigenous governance.

Vivien Sansour (she/her)
Vivien Sansour is an artist, storyteller, researcher and conservationist. She uses image, sketch, film, soil, seeds, and plants to enliven old cultural tales in contemporary presentations and to advocate for seed conservation and the protection of agrobiodiversity as a cultural/political act. Vivien founded the Palestine Heirloom Seed Library as part of this work with local farmers, and has been showcased internationally, including at the Chicago Architecture Biennale, V&A Museum in London, Dutch Design Week in Eindhoven, and the Venice Art Biennale. A culinary historian and enthusiastic cook, Vivien works to bring threatened varieties “back to the dinner table to become part of our living culture rather than a relic of the past”. This work has led her to collaborate with award winning chefs, including Anthony Bourdain and Sammi Tamimi. Born in Jerusalem, Vivien lives in both Bethlehem, Palestine and Los Angeles, USA.